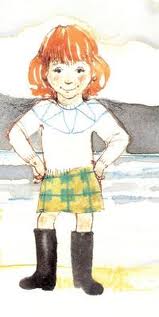 Katie Morag is the the creation of author and illustrator Mairi Hedderwick, and star of the Katie Morag books. She is also my secret style icon. From the knees up its all fey indie girl with artfully bobbled Arran sweater, but those boots! Hard as nails is Katie. With this look, you will go far.

I imagine that a teenage Katie Morag breaks hearts and intimidates classmates until she’s old enough to leave Struay for London, to find herself in the fashion world. After a few years of nonchalantly executed modelling campaigns, she retires at 23 and becomes the archetypal mad-haired designer. She continues to rock the look she invented as a child, much like Margo Tenenbaum. I’d like to be her friend but I’d probably be too in awe to speak to her.