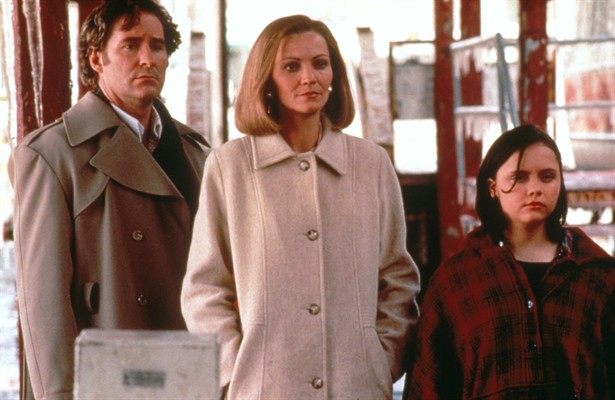 Everyone in this film gets at least one amazing look (Elijah Wood’s orange boiler suit in the ice is especially good) but Christina Ricci tops them all with her sparky teenage insolence, chubby little face and the defiant red cape that she wears when she’s freewheeling in the ‘burbs on her little bike. She’s precocious, sarcastic and politically engaged (“Nixon, it’s incredible, he should be shot”) in a world of sad, grey, icy-cold adults. Her parents (Kevin Kline and Joan Allen wearing mostly trenchcoats) hate each other, don’t care about Nixon and are baffled by their own kids. They dabble with drinking, therapy and key-swapping parties, while living in a very 1970s house full of floor-to-ceiling windows. Meanwhile, Ricci dots around being strange, unnerving the adults and having adventures all her own. She also wears a lot of woolly red jumpers. Clearly the girl knows her look.