Sometimes, the Hollywood makeover is Hollywood at its absolute worst – examples: the Cinderella/prostitution-redemption epic that is Pretty Woman (don’t look so smug, Richard Gere, you’re in a terrible film), the way they just took the glasses off a pretty girl in ‘She’s All That’…

But sometimes Hollywood makeovers are the best.

Audrey Hepburn carried off this trope with gorgeous dignity: in Roman Holiday, she runs away from royal duties, cuts her hair off, and hangs out with Italian crooks and a drunk American journalist for a couple of days. We know she made the right choice.

In Sabrina (the 1954 romance, not the teenage witch) Audrey’s make-over is sort of sweet and quaint and old-fashioned, with just a little hint of revenge… She begins the movie as the young daughter of the chauffeur on a wealthy American estate, in love with William Holden, the rich playboy son of the family. It’s all very inappropriate and everybody with a stiff upper lip is terribly embarrassed. She mopes around in a chequered dress with long sleeves and a swingy ponytail, and somehow looks about 12 years old. Eventually Sabrina is ‘sent’ to Paris for a year, to get over her obsession, study how to make a good souffle, and learn to be ‘in the world, and of the world’, as she so carefully puts it.
Ofcourse, when she gets home she is incredibly chic (this happens in Paris, by osmosis), and now looks about 25.

William Holden is very interested indeed all of a sudden, and Audrey tries to play it cool and be all grown-up (although she’s secretly delighted). The little flurry of romance between them leads to a scene in the family’s tennis courts, in which Audrey waits for him in a spectacular Givenchy gown for some night-time champagne. Alas, it’s Humphrey Bogart (the older brother) who shows up instead… 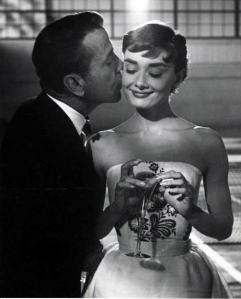 Honorary mention: Brittany Murphy in Clueless, my original inspiration for many an early teenage make-over (I was probably about 10 when I first saw that film. I knew no better). The severing of the t-shirt, the blood-red dying of the hair, its just feral in the way that only a peer-pressured adolescent acceptance ritual can be.