I poured the water glass a third full of cognac and drank it off.
‘That was very big,’ she said. ‘I know brandy is for heroes. But you shouldn’t exaggerate.’

– From A Farewell to Arms 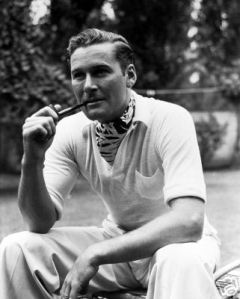 Was there ever a man as manly as Ernest Hemingway? When I’m feeling a little melancholy and addled, I like to think of Ernest and remind myself that courage is grace under pressure, and there’s always time for another cognac, and remember to write to Marlene Dietrich.

Actually my (main) weird predilection is to pry in to the lives of famous authors. They’re just so interesting. For a bunch of introverts, they get up to all manner of things. James Joyce was a dangerous cad, and I get the impression he probably went around airily excusing his own depraved, drunken excesses as just another burden of his genius, long before he’d ever presented the world with a masterpiece. Poor Mrs James. Doris Lessing campaigned for Communism in Zimbabwe (then Southern Rhodesia), before she fled her marriage and audaciously set sail for England with a manuscript in her suitcase.

Then there’s Ernest Hemingway. I have a love-hate affair with Ernest. He’s the sort of man I can’t help but feel an abiding admiration for, even though he did a lot of things I wouldn’t rate at all (lying, womanising, lion-hunting). I’ve only read one of his books (The Sun Also Rises) and have picked up snippets about him since, but the impression I have is that he always seemed to be protesting a little too much about manliness and integrity, and an idealised, old-world lore of courage and lonely survival. Yet there’s something fascinating in his hazardous, unreconstructed longing for danger. There was so much living in his life, that I could happily lose evenings reading long, indulgent articles about his exploits. 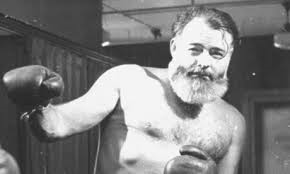 He made novel-writing seem like it was just a hobby on the side. When he wasn’t writing, he also: drove an ambulance and handed out chocolate for the Red Cross on the Italian front in 1918; met Marlene Dietrich on a liner bound for New York in 1934, and maintained a pen-pal friendship with her that seethed with surreal sexual fantasies; hung out with Faulkner and the Fitzgeralds in Paris, becoming a Modernist along the way; won a Nobel prize; got married four times; liberated the Ritz (and more importantly, the Ritz bar) when the Allied troops marched into Paris in 1944; survived two plane crashes in the Congo, and read his own obituaries after the papers mistakenly reported his death; and lastly, and most thrillingly, owned a polydactyl (six-toed) tom cat, who got around so much that there is now a whole clan of six-toed cats at Hemingway House, his Key West home. The house is now a museum. A museum overrun with six-toed cats.

It all seems incredible, which, of course, is exactly what Hemingway wanted. Andrew O’Hagan wrote a brilliant article about the man’s efforts to make a myth of himself: Hemingway’s letters revealing a ‘moment by moment process of self-enlargement, of fiction taking over from reality, of Hemingway braiding himself a style first and then a history to match it’.

He had yearned to be a soldier, and made much of his time in the war, but had in fact been rejected by the army because of his poor eye-sight. A contradictory story of his liberation of the Ritz was that he was greeted by the hotel director at the door, was ‘asked to leave his gun outside’ and was then ‘escorted to the bar where he ordered a dry martini’. (Which suggests to me that the director of the Ritz was the pretty fine specimen of manliness himself).

The more you dig, the more of a disparity there seems to be, between the life Hemingway lived and the life he wrote. O’Hagan is interrogative but tender, as he brings things to the light: some slight little moments that say a great deal. Hemingway signing his writing, ‘Old Master’ when he was eighteen years old; the library of books he left when he died, including, tucked away, ‘Hope and Help for the Alcoholic’.

I just can’t help myself. I have to know; even the sad stuff, even the tragic circumstances of his later life. There is a pure vitality in the way he tells it: for example, the declaration he made as an old man, about his first wife, Hadley Richardson: ‘I wish I had died before I loved anyone but her’. It’s shocking, the precision of this sentiment, and the belated intensity. It wouldn’t be out of place in a Shakespeare play.

A murky life, and an amazing way with words. Although I’m sure he wouldn’t be a great man to have as a pal, or indeed, husband, as a literary hero he’ll do fine. They’re always better when they’re a little bit flawed and fractured; and anyway, who wants a giant of artistic talent to be blandly perfect? I’ll take my favourite authors with a side of liquor, some questionable morals and some tall tales.

Even the slightly cringy efforts of self-aggrandizement are wonderful to read, because Hemingway was so brazen about it. I have a soft spot for these debonair authors, and I’ll always forgive a great novelist for being a terrible person. I’m pretty sure James Joyce was a terrifying individual. (This cartoon pretty much expresses my feelings on the one time I decided to read a little more in to his private life). Even if the myth of Hemingway was a spirited, irreverent confidence trick – well, that’s quite an achievement.

He liked cats and sleeping too, and for this alone, I think he might just be a little bit wonderful:

“I love sleep. My life has the tendency to fall apart when I’m awake, you know?”

One thought on “The Ernest Hemingway Institute of Manliness”