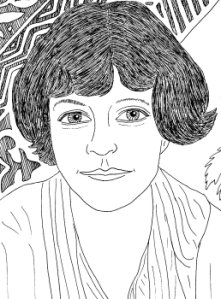 “I was wise enough to never grow up while fooling most people in to believing I had”.

Queenly, formidable, curious and peculiar, Margaret Mead is as an example of what happens when someone has some seriously sturdy self-esteem.

Her social scientist Quaker parents, along with her grandmother, raised Margaret to believe in her own capabilities, in a life that brimmed with love and care. By the age of four she could recite (verbatim) all of the gloriously nonsensical rhymes that her grandmother sang to her. She was taught how to make textiles as a child – meaning, the entire process, from building the loom to designing the fabric. Just, y’know, so she’d know how to do that.

When she was a young woman, she marched in to the world of anthropology (I imagine her in wellies) travelling the world, intent on discovery. She said of her chosen work – “anthropology demands the open-mindedness with which one must look and listen, record in astonishment and wonder that which one would not have been able to guess”. 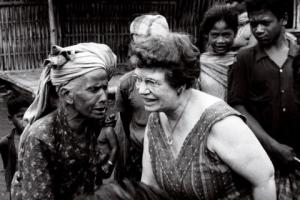 Mead brought the study of other cultures rocketing in to the mainstream, when she reported back to a stunned North America on the sexual mores of South Pacific and South-East Asian traditional communities. Her (somewhat controversial) findings were in part motivated by her belief that the stilted, stuffy, straight-laced dynamics of love and marriage in 1960s America needed to be punctured: that a broader vision of the possibilities of love, and the wisdom of other cultures, was a necessary and helpful message. In her small way, she set us free, so that we may cuddle with whomever we so wish. 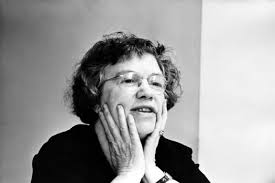 Mead had a long and productive life, including motherhood, three husbands (all anthropologists) and two long term relationships with woman. Perhaps most marvellously of all, she was the embodiment of confidence that did not tear down others, but raised them up (I love her line, ‘always remember that you are absolutely unique. Just like everybody else’). In line with Doris Lessing’s experience of the surprising ease with which empires and regimes can tumble, Mead spoke of her belief in the power of the individual: ‘A small group of thoughtful people could change the world. Indeed, it’s the only thing that ever has’.

In Revolution from Within, Gloria Steinem writes of her admiration for Mead, for her bravery and conviction, and the brilliant life she led, and also, how little she ever seemed to care what she looked like. If the world holds so much wonder to discover – how could the view in the mirror be of any interest? Steinem compares her with Eleanor Roosevelt, who was tormented by her own plainness. Despite her achievements, when asked if she had any regrets, Roosevelt said: ‘just one. I wish I’d been prettier’.

Steinem remembers seeing Mead walking about New York as an old lady, with her signature pronged walking stick. ‘It would have been unworthy of Margaret Mead’s life if she had ended it with regret for not being ‘prettier’’,Steinem remarks. ‘It was unworthy of Eleanor’s life, too. It would also be unworthy of yours or mine’. 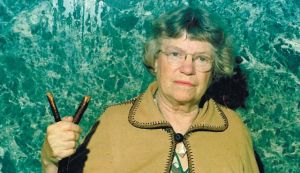 Steinem has had to deal with the same dreary, oppressive problem, albeit from a different angle (shocking the world by being both a feminist, and an attractive woman), and looks to Margaret Mead as a revelation, of how a woman might have meaningful work, a vivacious curiosity, a life full of love, and even move the whole world forward, without giving her appearance the time of day. When I grow up, I want to be Margaret Mead. I think we should all try for that. 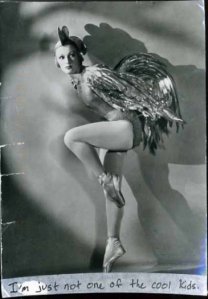