This little cat nurse … I have a horrible feeling that he’s that overhug guy. The other animals (most of them, admittedly, unconscious) don’t seem wildly pleased by what’s happening.

It is still the best Cat Update I’ve seen on the internet recently, though, and this cat is so kind and so cute it just melts my face. Also, I used to have a beloved cat buddy called Zachary, and once, when I was very ill, he came and lay on top of me, and stared at me intimidatingly as I was trying to fall asleep. Which is similar. Cats! Those lil guys are so adorbz.

I’m suggesting that you eat more than a reasonable amount of sweets today, and do all the other things you weren’t allowed to do as a child. Now we are adults, there must be some silver-lining to this insufferable dirge of work/bank statements/existential anguish. For example: recently I was in the middle of baking a cake and it occurred to me that I could just eat the raw mix. I always wanted to do that when I was a child. Just like that, I was unplugged from the Matrix; the veil fell away from my eyes. I wondered about all the other things I was not allowed to do as a child. All the things I could very well do now.

So I ate some raw cake mix and felt only mildly nauseous. Next, I went out without telling anyone where I was going. I crossed the road without looking. I walked along the top of high brick walls, unsupervised. I broke into an abandoned building. I played in a car that was on fire (legitimate 1980s urban leisure-time activity for the under-8s). I ate so many snacks that I didn’t have room for dinner. I stole a kid’s toys and refused to give them back. I said ‘they’re mine now’ and then hit him in the face.

Actually, that was all lies. I just ate too many snacks. Worth it, though. I felt so free, and I had pie.

Is there a corner of your life that is all yours, secret and starry, gorgeously addictive, in which you frolic in an orgy of contentment and discovery? (Saucy answers on the back of a postcard, please). This is your bliss. For me, it is writing stupendously embarrassing and inconsequential blog posts, mined from the alarming flotsam that fills my useless brain. This has no impact on the world, and is yet to lead to me being offered a large gold crown to wear at all times. But this is my particular bliss. What is your bliss? Everybody has a corner of life reserved for just this, and everybody’s is different (and thank goodness for that).  This article on the Brainpickings website implores you to make more time for this best part of life. It made me feel all the good feelings.  As Champion of Life, Doris Lessing, put it: ‘any human anywhere will blossom in a hundred unexpected talents and capacities simply by being given the opportunity to do so’. 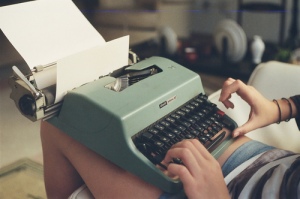 You may not have recently graduated from Harvard, but J K Rowling still has words for you. Here is perhaps the most humble, funny, self-deprecating, kind, determined, empathetic and encouraging speech that anyone has ever given to a bunch of slightly drunk people on a lawn.

This was my favourite bit, which helps a lot when it seems that the world has too many awful things in it and there isn’t any help for pain. Teary but, well, really, so enormously great:

“Unlike any other creature on this planet, humans can learn and understand, without having experienced. They can think themselves into other people’s places.

Of course, this is a power, like my brand of fictional magic, that is morally neutral. One might use such an ability to manipulate, or control, just as much as to understand or sympathise.

And many prefer not to exercise their imaginations at all. They choose to remain comfortably within the bounds of their own experience, never troubling to wonder how it would feel to have been born other than they are. They can refuse to hear screams or to peer inside cages; they can close their minds and hearts to any suffering that does not touch them personally; they can refuse to know.

I might be tempted to envy people who can live that way, except that I do not think they have any fewer nightmares than I do. Choosing to live in narrow spaces leads to a form of mental agoraphobia, and that brings its own terrors. I think the wilfully unimaginative see more monsters. They are often more afraid.

[…] one of the many things I learned at the end of that Classics corridor down which I ventured at the age of 18, in search of something I could not then define, was this, written by the Greek author Plutarch: What we achieve inwardly will change outer reality.

That is an astonishing statement and yet proven a thousand times every day of our lives. It expresses, in part, our inescapable connection with the outside world, the fact that we touch other people’s lives simply by existing”.

And with that, I bid you a very Happy Friday. Make it a weekend of imagination, pie and bliss.