If you are carving your lantern from a turnip (aye) and making a den in your living-room, wearing odd socks, leggings and a sequin-festooned jumper, then I wrote this Friday Happy List for you. (Can I come round and hang out?)

Here are some happy things.

The Middle Aisle of Lidl

Where dreams become manifest before your eyes. Right now they are selling giant sparklers! Make your night into a rollercoaster of emotion, as you watch each sparkler blaze brightly and then fizzle back into the nothingness from whence it came; just like we all will too, eventually.
What will be next in the middle aisle of Lidl? (Please let it be saxophones).

Oh and did I mention…

Making a Den in your Livingroom

If I ever have kids, they are more than likely going to have a miserable time of it. Firstly because of my insistence on touring as a family folk band most the year. But also because I’ll get too excited about things. Building a living-room fort out of duvets and hiding in it with torches will be enforced every Halloween to ensure maximum enjoyment of this festivity. Seriously though, even if you’re over the age of 12, it’s a blast.

What We Do In the Shadows

One of my favourite films is finally up on Netflix. So much rejoicing. It’s a documentary which follows the antics of some New-Zealand dwelling vampire flatmates, as they argue about who does the dishes and explain what being a vampire is all about.

The cover album of Taylor Swift’s 1989, by morose acoustic-guitar-botherer Ryan Adams, is amongst us. It is perfect to listen to with your headphones in as you splash about in the rain. I think his cover of Shake It Off is one of the most wonderful things to have happened. He takes a song that’s a bonafide pop diamond and he sings it like he’s Bruce Springsteen, all sultry and bruised and defiant. I LOVE IT is all. You listen to it and think, ofcourse Bruce Springsteen wrote a song about how he stays up too late and goes on too many dates. And it was the saddest song he ever wrote, too.
Perhaps more than the actual songs, I love the fact that Ryan Adams recorded Taylor’s whole album, because it seems like the most heartfelt vulnerable gesture of unrequited love.
He said to his pals ‘She’s not answering my calls but just wait until I record her whole album’, and they were like ‘Dude. No. Please, just pull yourself together’, and he was like ‘you’ll see! You’ll all see!’ *storms off in a huff*. Now the album is out, she still hasn’t called, and it’s so awkward.

The Victorians are on my happy list because once I really thought about them, about who they were and what they did, I did have to wonder if it was all just in jest. From 1837 to 1901: nobody was being serious. Evidence: top hats and monocles.
Further evidence: these photos from yore, in which the Victorians are trying to creep out the people of the future with some really lame photoshop. 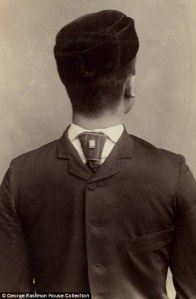 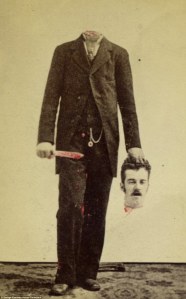 All they did was spend a lot of time taking photos of themselves pretending to be ghosts, spontaneously combusting, or trying to out-do each other with silly inventions. Like penny-farthing bicycles. Also, it’s worth considering that they were all out of their minds on opiates (and legally produced cannabis). Case closed.

Here they are. Look at them. Ridiculous.

I know a lot of people hate hashtags, and more specifically still, many people hate the way hashtags have broken free from social media and started appearing in actual speech in the real world. If hashtags are a virus, then idiots who shout HASHTAG AMAZEBALLS are the carriers.
Ah, no. I’m kidding. I don’t have a problem with hashtags, because there are probably bigger things to worry about (climate change; hate crime; seaworld, etc). I may even have said things like HASHTAG YUMZ because I don’t have any friends. (Maybe that sentence should be re-arranged).
Indeed, perhaps we should actually be making the most of hashtags. Did you know that another word for the hashtag symbol is ‘octothorpe’? Octothorpe amazeballs…? You can’t stop me.

Chancing across a word like ‘octothorpe’ was too good an opportunity. When it’s dark all the time, I’ve got a lot of evening to spend lying on the floor ruminating vaguely. Which led me to create an outline for a trilogy of experimental dystopian novels with a protagonist called Dr Octothorpe. (It is neither here nor there that I have never written a novel).
He is a ginger tomcat whose fatal flaw is his defensiveness about the legitimacy of his doctorate. (But you don’t even have opposable thumbs, Dr Octothorpe!) Dr Octothorpe masterminds the eventual osmosis of all cats on to the internet, from where they watch over us, a multitude of capricious tyrants. They try out neurological experiments on us to find out if we can be truly altruistic beings, but eventually conclude that trying to teach humans to care about things other than themselves was about as successful as trying to teach mice not to expect the worst. They will then, with great regret, exterminate us all. They’ll refer to it as operation #megafail.

This just in: the key to living a long and happy life is to chill.

Henry Allingham was a Welsh man who lived to be 113. When asked what all that was about, he said “the trick is to look after yourself and always know your limitations’. I can’t even express how much I love this. I plan to know my limitations with unbridled enthusiasm. When people ask me the secret to longevity, I’ll go all misty-eyed and say ‘oh, well, it’s my massive indifference to things. Always staying well within my limitations. All those fucks I did not give’.
He also said that the secret to living a long life was, ‘cigarettes, whisky and wild, wild women’. Good news, if that’s your thing.

I’m sticking with my early nights, and lanterns, sparklers and vampire films, rest and relaxation, anyway. Relaxation especially. When you’re tired and frazzled, try switching yourself off and on again. Works every time.

I’ll just leave this here as an instruction on how you must make your entrance at a Halloween party. And you thought you could just go as a ‘tinfoil robot/baked potato’ again.