If you could hibernate through winter, would you? Find a nice cave, fill it with biscuits, put on a jumper, and sleep? Sleep lavishly. Slumber in an absolutely unreachable state.

I know I would.

I’ve written before about my annual sad feelings which always come around just in time for Christmas, and the things that get me through the murky depths of midwinter: craft projects, story-telling and the video for Last Christmas by Wham! (which makes a compelling link between massive 1980s hairstyles and festive romance). It is all much silliness, but no I won’t take off this tinsel crown, because silliness is exactly the point.

I wholeheartedly believe in the lighter side of life, the sunnier side of the street, the blackcurrant wine-gums, and every single schmaltzy Christmas movie out there.

Quite aside from the winter sads, human life is dark. There are people without a home or a country of their own. Very big icebergs are vanishing. So many good things prove impossible; so few good things are possible. I think we’re extremely fragile creatures, all things considered, and ill-suited to a random and barbaric universe. We’re not good at living. We get so many things wrong. Sadness and loss just smash us apart.

Then comes winter, heaping blistering ice upon us. If you thought the world was bad, now you feel the sadness in your bones. This is when silliness becomes the most important thing in the world.

When it’s hardly a season for daylight (to quote Alastair Gray), put on bunny suits and cuddle. Build cloud castles.

A serious commitment to messing around, and a nice outfit with some big fluffy rabbit ears, could be what keeps you afloat until Spring. A wrecked, sinking person needs help; they can’t help anyone else. But if you can keep yourself reasonably ok, reasonably upright, then you’ll be around to do some of the important things in life, make a difference, and help others, in whatever way you do.

Having fun doesn’t mean you’ve turned your back on the world. It’s the shield that keeps you in battle.

I know now, that winter takes effort. It took years to notice that my intense sad feelings coincide with the shortest days of the year. I don’t think there’s anyone who sails through winter untroubled; even if they’re just a little bit irritated by the rain.

So I’ll keep writing blog posts detailing my devotion to the hairstyles of the 1980s and my festering crush on yodelling Goddess-amongst-us, Bjork.

I will continue to attempt to introduce new turns of phrase to the English language (which is an enduring triumph of hope over reality). I take full credit for the invention of the term ‘monobrow’ (yes, it WAS me, honest), and now, I would like to present a few new mantras for wintertime. Are you with me?

Hibernate, unrepentantly. Build the foundation of wellbeing, with fondue, watermelon, many blankets, and Netflix. Good sleep, good food, and getting out in the daylight: this is the thermal base layer of the psyche. From here you can build up some sort of fantastic and deranged glitterball outfit. But don’t think about the glitterball outfit yet. Just make sure you’re getting good sleep.
Although I sort of hate the phrase ‘self-care’, because it seems like a gateway drug to dream journals – as much as the phrase ‘self-care’ makes my skin crawl – that’s really what I’m saying. You’ve got to prioritize sleep and eat foods that could be described as fresh and zesty. For all the stoic, stiff-upper-lip Northern-Hemisphere people reading, we’ll just pretend I didn’t mention self-care – score out self-care and we’ll say we’re Being the Bear. That’s acceptably rough and demented and adventurous. Be the bear! Nobody will know that you mean a bear who sleeps all the time.

Listen to Your Canaries

Now you have your thermal base-layer, we can add something else. This is a phrase I saw someone using over at captainawkward.com (a fantastic winter distraction). It means, listen to your gut instinct. You know that way wintertime lets sadness into our bones – our bodies are always carrying around feelings. Your body has no qualms about telling you things that your mind is furiously denying. Listen to your canaries. They’ll tell you when to stay in, when to go out, who warms you up like a radiator, who leaves you feeling drained. Your canaries will tell you what you already know: that you should NOT sleep with your handsome, mysterious, emotionally volatile Swiss roommate Giuliano. Even if it’s just the two of you in a snowstorm. Your mind is saying ‘ah now, it’ll be fine. Look at his lovely big arms: I’m going to touch those’. Your canaries are saying RUN. Rrruuuuunnnn.

So you’re gorging on sleep and fresh food and you’re staying away from Giuliano. You’re mastering this. Now you can start asking loved ones how they’re doing. It is a truth universally acknowledged that most people, most of the time, will put a brave face on it when they feel scared and miserable. It’s a sad state of affairs. Maybe nobody wants your help, but it seems like a good idea to be there in case they do.
Think of George Michael.

I can’t imagine what George Michael’s Christmas was like, the year that he came out of rehab for hair-spray, and could clearly see for the first time, what an absolute mountain of hair he had been prancing about with on his head for all of the 1980s. The shame. It must have burned. The man who gifted the world Wham! AND Last Christmas by Wham! … just, I mean, he shouldn’t have had to deal with that alone. 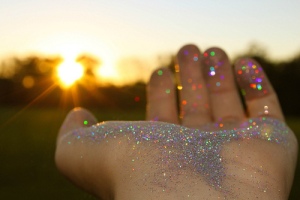 Alright NOW we can get to the fun. You’re warm, you’re happy, and so are your people. Time to paste glitter all over that.

Come up with some totally mad ideas (it doesn’t have to be a consensual glitterfication party, that’s just one idea) and see if anyone wants to join in. When it comes down to it, this is the very essence of human existence. This is why we are here, this is what it all means. Send out invites to that thing you just invented, and make it a real thing that happens. Just three golden rules: safety comes first, consent is required, and glitter gets everywhere.

Moving on from my annoying optimistic, cheery, dictatorial tone… I’m going to be controversial and say that the key to maintaining happiness is to say no to a lot of things.

The idea that ‘getting out of the house’ and ‘saying yes to every invitation’ will cheer you up? This is dangerous advice. No. Just no. Do not say yes to everything. Do not say yes to many things at all. Part of self-care – I mean, being the bear – is to guard your time as you would guard your cubs. It’s the most precious thing you have, and there’s a finite amount of it.

If someone has just come up with a mad plan and they want to see if I’ll join in, I’ve learned the hard way that I need time to actually think about whether I should say yes. I’ve learned from being brutally exhausted from saying yes to too many things, and then turning up to someone’s glitterfication party in a state of brutal exhaustion, and rambling incoherently, and generally being terrible company, before falling asleep at their dinner table. Last Christmas I managed to go 20 days in a row in which I drank at least one glass of prosecco. It was the best of times, but also, in many ways, it was the worst of times.

So if someone comes along with an invitation to help them rehome an army of thousands of biting ants, or to listen to them describe how sophisticated and nuanced their taste in music is:

And that, I hope, will get you through to the other side of Christmas.

2 thoughts on “Be the Bear, and Other Mantras to Get You Through Winter”