Life is pretty short on miracles. I know this because I have made that shift, as pretty much everyone has, from my childhood state of believing pretty much ANYTHING, to the slightly flattening realisation that unexpectedly wonderful things are few and far between. Which is fair enough, because life is unmiraculous, and I’d be hell […] 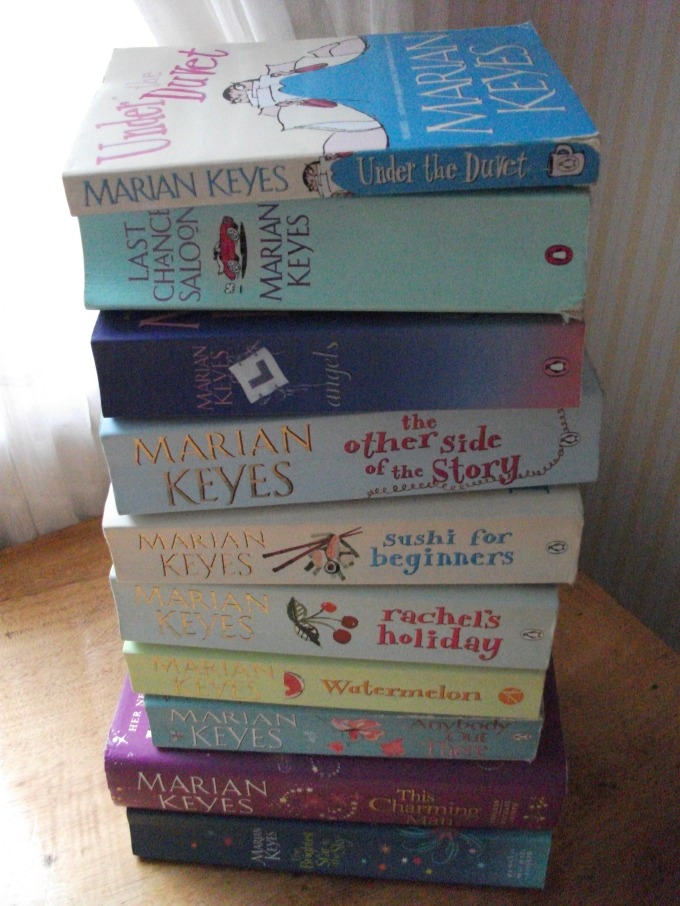 Alternative Title: I Learned Everything I Know From the Novels of Marian Keyes.

In the midst of the never-ending clearout of my possessions, I re-organised the bookshelves and took stock of all the stories I have loved. I had the usual array of Nabokov (girls love Nabokov: true fact. Boys should know this) and a well-worn copy of Ulysses. I also had 10 Marian Keyes novels – the whole lot. And you know, it was the cutesy covers of the Keyes novels that I was most excited about, because I knew I had a whole lot of joyousness right there to re-read my way through.

I started with Last Chance Saloon when I was 15, and I was besotted. Behold, the original secret style icon, Katherine the accountant, a character who lived in London, owned a ‘powder-blue Karmann Ghia’, went to the cinema by herself and had matching pyjama-and-dressing-gown-sets. She was everything I wanted to be (except an accountant).

Keyes provides big chunky books that just carry you along – tender, compassionate portrayals of people going through just the worst – bereavement, alchoholism and rehabiliation, illness.. and actually surviving. And, they’re all very funny.

If we are in any doubt about her genius, I’d like to present exhibits A and B.

A) Marian’s take on feminism (and the bad rep that it has had): “As long as you believe you’re entitled to the same rights as everyone else (i.e men) you’re a feminist. See, that’s not so bad, is it? In the words of that bard and visionary, Adam Ant: There’s nothing to be scared of’.

B) In ‘Rachel’s Holiday’ (clue: the book is not about a holiday), there is a side-plot about a group of Irish men who hang around in the same New York bars as the title character, and are all fairly poor studenty types, who share between them their favorite pair of leather trousers, which they believe to be incredibly cool and quite the hit with the ladies (these men are supposed to be pretty abysmally lacking in judgement). They actually have a time-share on a pair of trousers. There is no reason for that to be in the novel. It just is. Amazing.

So- to get back to Book Snobs – it seems obvious that while I studied English, some of the books I hold dear wouldn’t ever see the far side of an Eng Lit reading list. Book Snobbishness is rife in this world.

But. It works both ways.

To be fair, it is a battle. It takes steely determination to get through some of it. There are whole chapters that I just couldn’t read. But it is also a deeply compassionate book, expressing the real horrors of life, both public (the anti-semitism in 1920s Dublin, brilliantly, scathingly picked apart by Joyce, as a rebuke and a warning…) and personal (Bloom’s painful, diffused, utterly secret feelings about his wife’s infidelity). All kinds of hypocrisy are laid bare. As well as the horrors, there sublime and the beautiful (Molly Bloom’s Soliloquy, her enduring love for her husband).

Tiny excerpt: Bloom gets into bed, his wife is already asleep: ‘the presence of a human form, female, hers, the imprint of a human form, male, not his’. In such a huge book this is the only statement of certainty about whether or not she’s been unfaithful. Later Bloom lies in bed and thinks of ‘the inanity of extolled virtue: the lethargy of nescient matter: the apathy of the stars’. He has forgiven her, and feels that she doesn’t really need to be forgiven anyway (the pointlessness of ‘extolled’ virtue – he thinks it would be wrong to hold a moral argument over her) and then he thinks of ‘the apathy of the stars’; that none of this really matters, in the context of the world, the stars, all of life.

Phew. It’s brilliant, is all. Here’s a picture of a Karmann Ghia. WANT.