Christmas is here, season of goodwill and morning drunkenness. It’s my favourite time of the year. Everyone wears wool. We all eat pastry a lot more than usual, and take a moment now and then (lackadaisically dusting pie crumbs from our jumpers) to think of those less fortunate than ourselves.

So let’s do that. Join me now on a journey through the ghosts of Christmas failure. First and foremost, of course (I know you thought of it too), we should take a moment of pause for George Michael’s hair in Wham’s Last Christmas video. 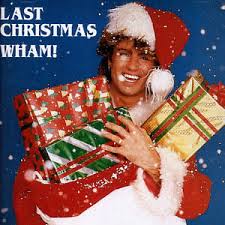 Watch as young Reaganites eschew the traditional family holiday to go away for an extended disco at a country cabin, cavort in the snow in anoraks and, in the evenings, giddy with hair-spray fumes, indulge in adulterous seductions in a consequence-free environment. We all know that the 1980s spawned generational regrets in every sphere of life. But mostly it was in the sphere of hairstyles. 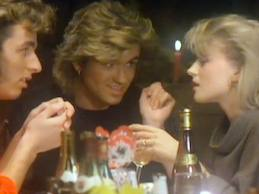 I realise that this Wham video was a dark place to go in a post about Christmas… but dwelling on darkness is something of a tradition in itself at this time of year. From A Christmas Carol to It’s A Wonderful Life, we like to look at the past and mull on things lost, the alternative lives that never were; on regrets and then, of course, on hope and redemption. 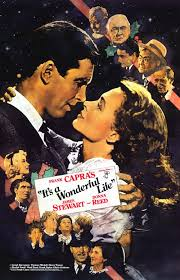 I only saw It’s A Wonderful Life this year, for the first time, and it is a delight, mostly because James Stewart is one of the Best People Who Has Ever Lived (he also starred in Harvey, a 1950 film about a man whose best friend is a giant invisible rabbit, and that’s all a man ever need do to win at life).

It’s a Wonderful Life is famously about failure and salvation, community and family, and the spirit of generosity and self-sacrifice. But just one moment…

I’d like to draw attention to a moment of singular comedy in this film, borne from the time before men realised that women were people, too:

Clarence, the guardian angel sent to rescue George from suicide, is showing him how the world would have turned out if he had never been born. For the most part, it would have been slightly worse; so we’re pretty happy to be onside with this project to keep George Bailey alive. And then George, in sudden terror, thinks to ask Clarence what became of his wife: “Where’s Mary? If this is all real and I was never born, what became of Mary?” 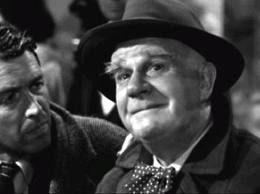 (Viewer can feel something very bad is on the way)

“Please, Clarence, where’s my wife? Tell me where my wife is”.

George: “Where is she? What happened to her?”

Clarence: “She became an old maid”

George Bailey: [desperate] “Where is she? WHERE IS SHE?”

And then Clarence delivers the fatal blow: “She’s… she’s just about to close up the library!”

The saddest thing is that Mary would therefore be surrounded by books, and the more of them she reads, the less mentally stable she will become. That’s what used to happen to women when they read books in 1946. We know this because of science and also, anecdotal evidence.

Obvs George runs off to find Mary and deliver her from this ongoing trauma. When he spots her in town and runs madly toward her screaming ‘That’s my wife!’ she turns round, bespectacled, and, dare I say it, quite a little bit stylish: 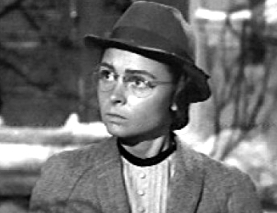 She looks afraid, but there’s a steely impatience in her eyes, too. A man running wildly toward her to rescue her from spinsterhood, declaring her as his bounty: this has definitely happened before to Mary Hatch. She’s over it.

In the spirit of Christmas redemption, let us consider the sort of a life Mary Hatch might have lived, if she had never met and married George Bailey, or indeed, any man at all:

The Wonderful Life of Mary Hatch

Mary Hatch spent her childhood in the idyllic backwater of Bedford Falls. A brilliant backgammon star in her high-school, she won a scholarship to study Russian literature at college in New York. There is very little information on her life from the age of eighteen to twenty-two; only one photograph survives, of Mary smoking a pipe at a party in the lobby of the Algonquin Hotel. She was rumoured to be part of Dorothy Parker’s circle and had one poem published in The New Yorker, to great acclaim. This was to be the only work published in her lifetime.

At the end of the 1920s she left for Europe, reportedly in the company of Ernest Hemingway, a claim they both denied for the rest of their lives. The only detail ever found on Mary’s stay in Paris and Barcelona was a series of letters to her friend, the artist Miro, in which she described having left New York with a suitcase containing a green cigarette case and a dress made of antique chainmail.

Mary returned to America at the start of World War Two, having escaped Europe via the port of Casablanca. She had in her possession a diamond ring which was sold at auction. She was to live off the interest of this sale for the rest of her life.

Mary became a volunteer for the war effort while in New York, and sometimes woke at night to the lucid dream that she was in fact a frustrated housewife, still stuck in Bedford Falls and married to a gangly man who wasn’t very good at maths. She had night-terrors as she imagined being chained to four small children, all of whom had an overreaching sense of entitlement. The only small moment of happiness in these dreams was that one of her daughters was called Zuzu, which was a stylish name.

She briefly returned to Bedford Falls at the end of World War Two to take up a post as a librarian during in a period of writer’s block. The small town aesthetic was stultifying, however, and in search of greater plains of intellectual stimulation, she learned how to sail, captained a small ship and set off for undisclosed adventure.

In the 1950 she returned to New York and wrote three long novels from the bedroom of her town house on the Upper East Side. At her behest, all three were kept under lock and key until her death.

In the 1970s, Mary Hatch visited Britain and presented a series of lectures given from an upturned wooden apple-box at Greenham Common Peace Camp. Many have pinpointed these lectures as a spark for the feminist revolution. She became good friends with Angela Carter and was quoted as saying of her time in the twenties and thirties with the stars of American modernist literature – ‘It’s been a picaresque life’.

Mary never married or had children, but was rumoured to have taken lovers. She died peacefully in 1989 in the apartment she kept in London, which she shared with Claude, her pet faun, a gift from a European prince. After her death, seven completed novels were found under her bed, all of which were published, along with the two novels of the 1950s, once they were released from the Swiss bank vault. These surprising avante-garde texts ensured stratospheric posthumous fame.

Turns out Clarence the guardian angel was a little hasty in his lament over Mary’s circumstances. But that’s guardian angels for you.

Anyway, it wasn’t to be; she was happily married to George and they got to live another day in the warm fuzzy glow of Christmas good tidings, and to be honest, who could stay mad at Jimmy Stewart? I’m glad that Clarence brought him back from the brink. Even if he wasn’t the ideal husband for a gal like Mary, it’s a beautiful film about being your very best self. 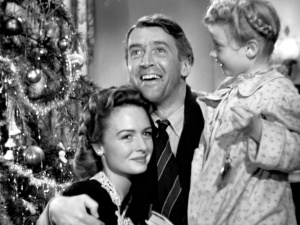 One thought on “The Wonderful Life of Mary Hatch”