I hated Glasgow for the first four years that I lived here. Before I moved, I’d been warned that it would rain interminably, but ‘the humour’ would make up for it. The city seemed to me (eighteen years old and fresh from the Highlands, as green as you get) just a big brawling mass without a heart. The buildings were ugly and bleak, the streets were dirty and decrepit, and the pavements all seemed to lean one way or another. It was driech. Ruminating (soggily) as I passed one-legged pigeons and drifts of empty Tennents cans, ‘humour’ seemed like the saddest word ever uttered. It was a word more suited to describing a delicate misty rain (ah, there’s a humour in the air today: your umbrella won’t do any good).

Besides, there was no humour to be found in Glasgow. The Glaswegians were raging. All of them. Anger exploded from strangers in the street and on buses, as if just the latest episode of a mysterious, long-running, cryptic dispute being upheld across the city. It was incomprehensible, loud, close, and murderously intense.

With the benefit of hindsight (bloody hindsight, always right), I can see that I was perhaps not ready to settle in. I had just taken my first bracing dip into the icy sea of heartbreak. I was living on coffee and alcohol, partying until 5am and waking up at 3pm, and I was flattened by the sort of sadness you feel when you’re eighteen and you’ve been dumped. You know, the certainty that nobody, in the world, has ever felt as sad as you do. I had a tiny violin with me always, and it was playing the saddest of songs, and it was playing that song just for me. The city was just a handy canvas of misery in the background. 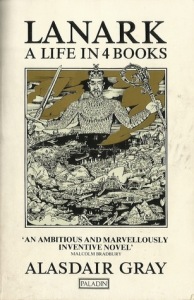 How I wish I’d had Lanark back then. But it did arrive one day, a little later in my life. I read it, and Glasgow became apparent to me, finally. Janice Galloway puts it beautifully in her recent introduction to Lanark: the portrayal of Glasgow in the novel ‘felt more like a guidebook than a fantasy’. It’s all there: the dirt and the squalor, the sarcasm, the energy, the tawdry glitter and glamour, and the humour (oh, it’s there), elegiac, so swiftly woven out of such carefully chosen words, expressed with lilting, heart-melting lyricism. Our hero, Lanark, is lingering outdoors in the evening, when a stranger asks him what he’s up to. He says that he is looking for daylight. ‘This is hardly a season for daylight’, replies Lanark’s new friend, and with that perfect tarnished poetic tone, the story sets off.

Quite far in to the book, Alasdair Gray makes his case for art, literature – dreams – as the very life and blood of Glasgow. Two young and cynical art students, Thaw and McAlpin, discuss their hometown:

‘Glasgow is a magnificent city’, said McAlpin. ‘Why do we hardly ever notice that?’

‘Because nobody imagines living here’, said Thaw. McAlpin lit a cigarette and said, ‘If you want to explain that I’ll certainly listen’.

‘Then think of Florence, Paris, London, New York. Nobody visiting them for the first time is a stranger because he’s already visited them in paintings, novels, history books and films. But if a city hasn’t been used by an artist not even the inhabitants live there imaginatively. What is Glasgow to most of us? A house, the place we work, a football park or a golf course, some pubs and connecting streets. That’s all. I’m wrong, there’s also the cinema and library. And when our imagination needs exercise we use them to visit London, Paris, Rome under the Caesars, the American West at the turn of the century, anywhere but here and now. Imaginatively Glasgow exists as a music hall song and a few bad novels. That’s all we’ve given the world outside. That’s all we’ve given ourselves’.

This is at the heart of Lanark’s 560-odd pages – the characters ebulliently articulating the problem that the author is in the middle of solving. It’s a feisty novel, full of games and diversions and dead ends, and this isn’t the only time that the characters challenge the actions of their creator. (Thaw later tracks down Gray, finds him scribbling away in a heap of papers, and accuses him of being inept).

Lanark is the story of a man called Duncan Thaw, and his childhood and early adulthood in Glasgow. Duncan Thaw is meek and thin, plagued by illness, selfish, unlikeable. He is brutally violent to his sister. He believes in a grandiose, overblown vision of his own artistic talents, cannot compromise or make light of himself; and yet his ego is fragile as egg-shell, crushed at the first harsh word. The author leaves no part of the man uncovered – we listen in as he searches his imagination for the furthest dreams of sexual depravity to distract himself from his recurring asthma attacks; while in reality, impotent and terrified, he scuppers every chance he has with the few girls who show an interest.

The novel also contains the story of an ‘afterlife’, in which a man called Lanark (who is a lot like Duncan Thaw) travels through, around, and near, a city called Unthank (which is a lot like Glasgow, only more so).

In the afterlife, Lanark and his ilk are all slowly succumbing to dragonhide. Emotional numbness, and antipathy to the needs of others, manifests in a slow turning of the flesh to stony silver scales. Lanark’s arm starts to calcify – his hand becomes a gigantic, uncontrollable claw – but before he has turned entirely monstrous, he finds an escape from the city. The woman that he falls for, Rima, becomes entirely imprisoned within her dragonhide (she is an enormous and very angry silver dragon, by the time Lanark is reunited with her outside the city of Unthank). He must find a way to cure her. The cure he finds is to talk to her, and love her.

The idea of dragonhide as a disease of geographical place seems entirely acceptable, if that place is Glasgow. The world Duncan Thaw lives in is alcohol-sodden and dour. Parents beat their children and then dunk them in ice baths to shock them out of crying. Men work doggedly in dangerous conditions, their bodies hunched and hard. Women are resentful, subdued, and routinely abused; only heard when they can get a word in. People die of chronic respiratory illnesses, entombed in tenements. Love in this world is an almost unbearable thing. What I think makes this novel a masterpiece is Gray’s sensitivity to the presence of love in the lives of people who can’t talk about it. Thaw is incapable of understanding his grief when his mother dies – he simply ignores it. But it returns, again and again:

‘Grief pulled at an almost unconscious corner of his mind like a puppy trying to attract it’s master’s attention by tugging at the hem of it’s coat’.

The hardness and coldness of Scottish life are told, however, without chintzy, mawkish hand-wringing. There is no poor-me, poor-us. Instead, we follow Thaw, the unkind, unlovable, vulnerable young man, as he struggles and eventually falls apart, mentally, and physically. And then we see him reborn, as Lanark.

Now he can express himself with certainty. He defies authority. He questions everything. He turns Rima from a silver dragon back to a woman. He loves and is loved in return: ‘He had been near beauty before but had never expected to touch and hold it’, Gray writes –

‘and being held and caressed by it was so luxurious that it made his insides feel golden. That she, delighting him, delighted in him was a reflection multiplying delight until it shone round them like a halo’.

They have a baby. Rima continues to insult him and argue with him (at one point she patiently explains to him that he is taking part in a story in which she is the central character; not the other way around. You can’t help but cheer her on at this point). Together they rumble through a haphazard, gigantic story of another Scotland that is somehow exactly the Scotland that we know. Lanark stumbles and worries, falls, persists, tries harder. That’s what struck me as so hopelessly loveable about Lanark: the sheer insistence of the man.

Political rallies, corrupt councillors, gorgeous irrepressible independent women: these are Lanark’s vivid satellites. He declares, ‘my thoughts are bigger than they used to be’, and that’s how I felt when I read it for the first time. It was as if someone came along and said, ‘but look, this city has been here the whole time!’ This big dirty brawling mass with a heart. Unromantic, chilling and irritating, and lovely, and intoxicating.

I’m in the middle of reading Lanark for the second time, having recently seen the amazing theatre production (a bum-numbing 3+ hours, but the novel deserves at least that, and it was utterly mesmerising).

If you haven’t read it, and even if you don’t have an intense love-hate relationship with the city that is the central character – I can’t recommend it highly enough. There is so much more to it than I could squish into this post. Read it slowly. Re-read it. You’ll have plenty of time, cosy in your bed – this is hardly a season for daylight anyway.

NB: to this day it hasn’t stopped raining in Glasgow. 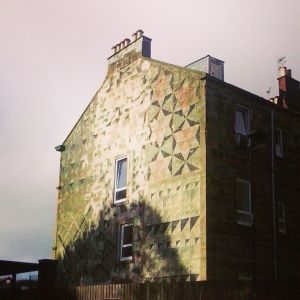