While searching through the bookcases in search of tutoring materials, I pulled out a beautiful 1969 print of Edward Lear’s The Owl and The Pussycat. It’s so utterly wonderful and of-its-time that I want to frame every single page. Except that I can’t bear to rip the book up to do so. Were not the sixties great? Dreamy, tranquil, innocent. (I’m obviously imagining these pictures to be representative of the whole). (Nevermind that the swinging sixties possibly only happened to about 12 people, one summer, in Camden).

After some foraging I unearthed some more delights, most of them from the seventies. The World of Uncle Peter deserves a place in my heart for featuring a protagonist (Uncle Peter, naturally) who is an ex-art school dude who frequently has delirious daydreams ….

Check out that expression!

There is also a definite Royal Tenenbaums feel to the list of characters.

‘The Witch’s Hat’ was one of my favourite books when I was a little critter. The bat-print on the inside cover is exactly what I’d like on a t-shirt these days… 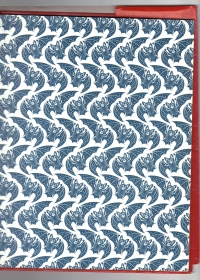 And the illustrations (from 1980) have a certain Pink Floyd appeal to them and many look like they’re simply a utilitarian portrayal of the bleakness of that whole decade. I was born in 1985, and as far as I can remember, that decade wasn’t just riots and wet carparks full of teenagers with shellsuits. But hey, I was only five when the sexy nineties began, so I have no idea what was actually going on.

(That line is actually about the 1980s in general).

Lastly, ‘Magic’ and ‘I Thought I Saw’ used to haunt my dreams when I was young. There was something about bright colours with sparseness of illustration that really got to me – I have no idea why. 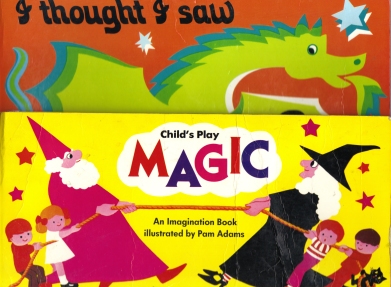 The witch appearing from a box of matches with ‘Children, let’s make a fire, shall we?’ is wonderful. Before health and safety was even a twinkle.

Part of me really wants all this stuff on my walls. But I couldn’t dismantle the books. They’re all little works of genius.